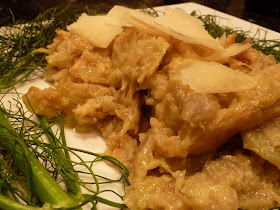 In a medium size pot, heat the oil at low temperature and then add the fennel chunks once the oil is sizzling. Saute for about five minutes, making sure that the fennel doesn't cook too much. Then add the water so that the fennel is almost covered. Top with a lid, leaving a little gap for the steam and let the fennel tenderize for about 40 minutes . Stir the fennel every five to ten minutes. The goal is to make the fennel absorb the water and become tender at the same time. When the fennel has a creamy , soft consistency add the butter and keep on mixing for 5 more minutes. Before serving, add the grated Parmesan cheese and top it with the cheese savings. Serve warm as a side dish with a main course
Unknown at 8:57 PM
Share